The sporty second life of a turbine boom

The sporty second life of a turbine boom

With an eight-meter high mobile turbine blade on a specially designed trailer, Zwaan Buitenport offers sports enthusiasts a new challenge. Or, how Jurgen Zwaan gives a written-off boom a new life. With thanks to Certion.

Since 2007 Jurgen Zwaan from Dronten has been active with his outdoor company that focuses on active recreation in nature. Think survivalrunning, archery, biological kloting, rafting, canoeing and various other team activities. By the way, also on his hectare of land between the fields you can indulge yourself on the obstacle course he designed himself.

AND NOW A CLIMBING BOOM?

“About three years ago the idea came to me to integrate a typical Flevoland element into the concept. And what is more Flevoland than a wind turbine, which can be found everywhere in the polder? I knew Stephan de Lange from Certion from the Dronterland Survival Run, which we both sponsored from our companies. Certion had this blade lying around on its outdoor premises, ready to be recycled. So we were allowed to have it.” 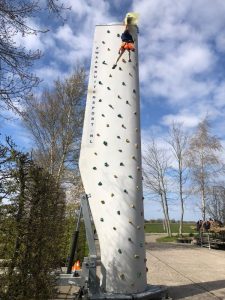 A TRULY LOCAL PRODUCT, THEN?

“Yes, because the history showed that the fiberglass blade was once built by a Dutch manufacturer that was later acquired by Vestas. The nice thing is that many other local parties cooperated in the completion and conversion. Several trailer parts are from Nagele, the welding was done in Biddinghuizen, the hydraulics are from Lelystad and the fuse system is from Almere. For the development costs I was able to use a voucher from Horizon Flevoland.”

WHAT IS THE ADDED VALUE OF THE WICK?

“As far as I know, we are unique in the Netherlands and surrounding countries with our mobile climbing boom. Our goal is to be able to take the 950 kilogram climbing jib anywhere, such as events, company parties or festivals at home and abroad. As a company, you can also attach your logo and flag to it, for example. It is a real eye-catcher to put somewhere and challenging to climb. We have made two climbing routes, but want to add a third on the convex side.” 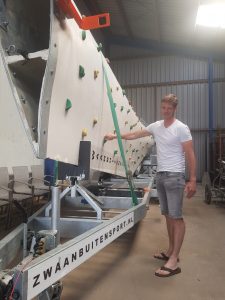 WHAT IS INVOLVED IN THE (DE)ASSEMBLY?

“Quite a lot. First of all, with Certion’s help, we sawed off the nineteen-meter-long wick, leaving the bottom and thickest piece of eight meters. That has to do with the maximum length you can pull on a separate trailer behind your car. Incidentally, we also had that trailer custom-made so we could easily carry the wick and stamp and install it. In addition, we mounted several dozen climbing handles to the wick ourselves.”

“Yes it is, that’s the most important thing. We have had it all tested and approved properly, including for wind resistance. In addition, we have had a fully automatic electric fuse system mounted on top of the boom; as a result, you never fall more than a few centimeters. All in all, it is an innovative invention of which I am very proud. Partly thanks to Certion.” 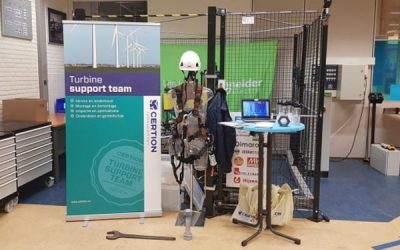 Certion goes back to school

How do you recruit the interns of tomorrow and technicians of the day after tomorrow? By getting young people excited about a job in technology. That is why Certion's commercial manager Bart Thiele went back to school. 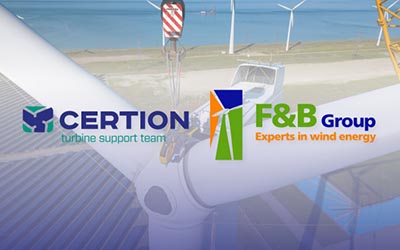 Certion has joined forces with F&B Group. With this partnership, both parties share and broaden their knowledge of the market and different types of wind turbines. The new partnership means expanding the service offering and capacity. 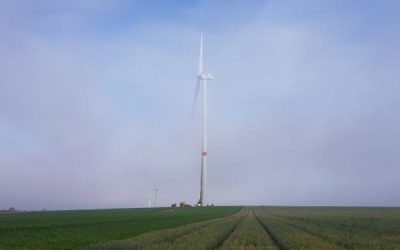 Last August, Certion was able to exchange a defective high-voltage transformer for one of our cooperation partners in a machine house at a height of 105 meters. What precedes all that?